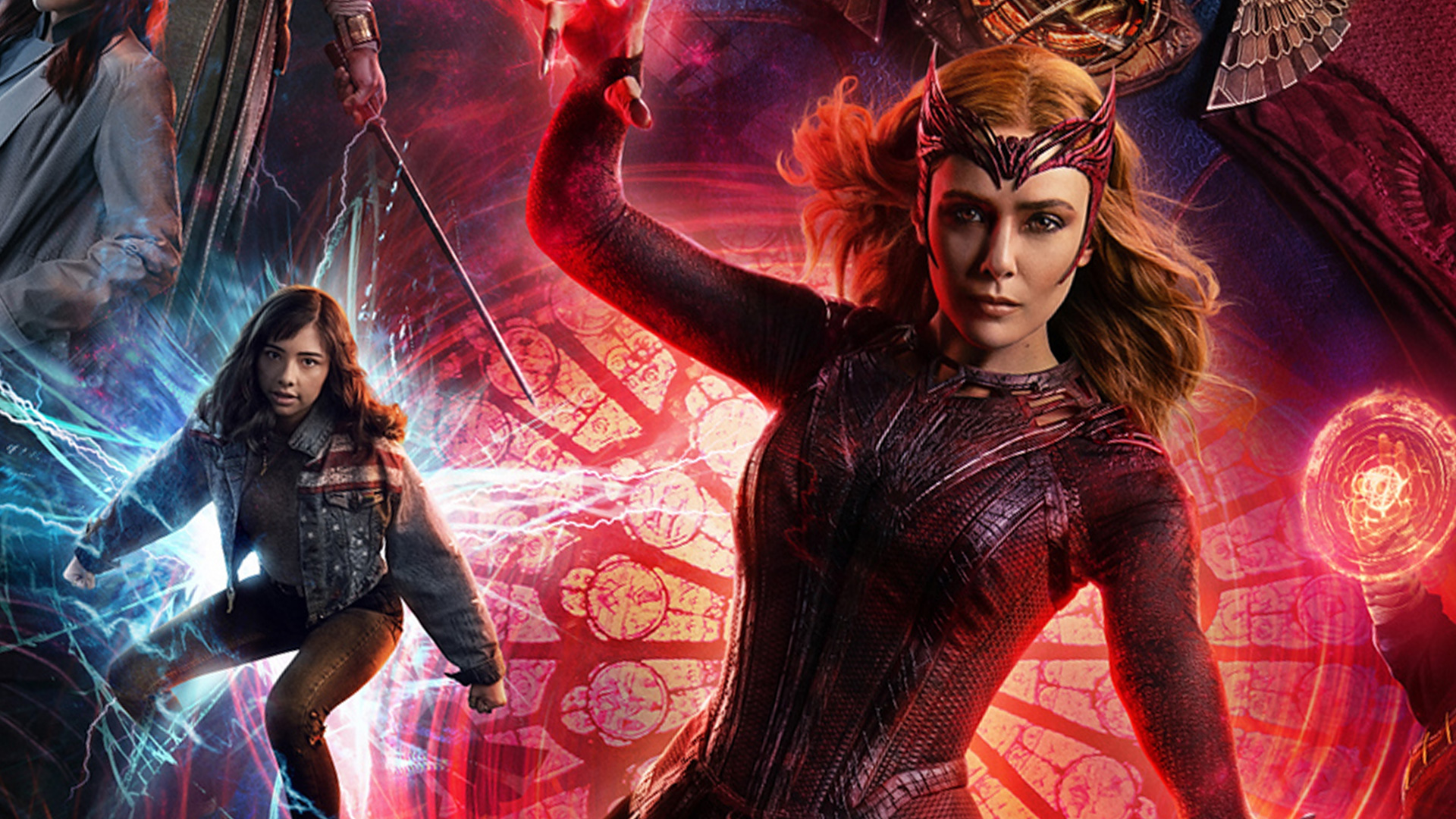 This article was originally intended for IGN but ultimately was not published. Kat is publishing it here instead with permission from her editor. We also discussed Doctor Strange in the most recent Axe of the Blood God Post Show available through our Patreon.

Spoiler Warning: This article contains heavy spoilers for Doctor Strange in the Multiverse of Madness.

WandaVision might be the best of the MCU Disney Plus shows — or at least the most ambitious — but it never did manage to get the ending right.

The original show ended on something of a cliffhanger, providing neither closure for Wanda Maximoff (Elizabeth Olsen) nor the poor, brainwashed citizens of Westview. Instead, the newly-christened Scarlet Witch has a fairly conventional light show fight with fellow witch Agatha Harkness (Kathryn Hahn, who will soon get her own spin-off), after which she has this puzzling exchange with Monica Rambeau (Teyonah Parris).

“They’ll never know what you sacrificed for them,” Rambeau says in a scene that clangs against the torture Wanda inflicted on the innocent people of Westview.

“It wouldn’t change how they feel about me,” Wanda responds.

It was ultimately a less-than-satisfying conclusion to an otherwise strong show, which was carried by Olsen’s outstanding turn as a grieving widow, sitcom wife, and villain. As Matt Purslow observed in his review of the season finale, “Rather than finding true inner peace for its grieving hero, the conclusion embraces the uncertainty of an apocalyptic force. This furthers the complexity of Wanda’s character, but does so by sacrificing a feeling of completion for WandaVision’s central arc.”

As it turns out, Doctor Strange in the Multiverse of Madness, which premiered last week, is that finale. Pitched as a potentially major expansion of the MCU, it’s instead arguably the culmination of a tragic arc that began as far back as 2014’s Captain America: The Winter Soldier, featuring Scarlet Witch as she goes full Dark Willow on the multiverse (that’s a Buffy the Vampire Slayer reference, in case you were wondering). In the process, Scarlet Witch goes from misunderstood hero to full-blown monster, complete with nods to horror classics like Carrie and Alien.

It’s the reckoning that WandaVision’s finale never really had, pushing Wanda further and further beyond the moral event horizon as she obsesses over reuniting with her children somewhere in the multiverse. By the middle of the movie she’s fully off the deep end, variously snapping Professor X’s neck with her mind and pursuing the film’s heroes while covered in blood.

It’s quite a turn for a character who up until WandaVision had been consistently overlooked, with the New York Times at one point referring to Wanda as one of “the lesser Avengers.” In the wake of Age of Ultron, where she was first introduced alongside her brother, Quicksilver, Wanda consistently struggled to stand out from the increasingly bloated Avengers cast. Usually clad in street clothes or perhaps a red trenchcoat, with powers that typically involved firing red energy blasts, she was rarely very memorable.

It’s no wonder that until WandaVision she was probably best-known for the memed moment where Thanos dismissed her claims that he ruined her life with a cold, “I don’t even know who you are.” She would finally break out in WandaVision, giving Olsen the opportunity to showcase her considerable range as an actress. Grieving over the death of Vision, Wanda takes over a quaint suburban town and turns it into a sitcom world where she is raising two boys alongside her mechanical husband. Olsen portrays Wanda as alternately sympathetic and unhinged, driven by a mixture of grief and a deep sense of grievance. 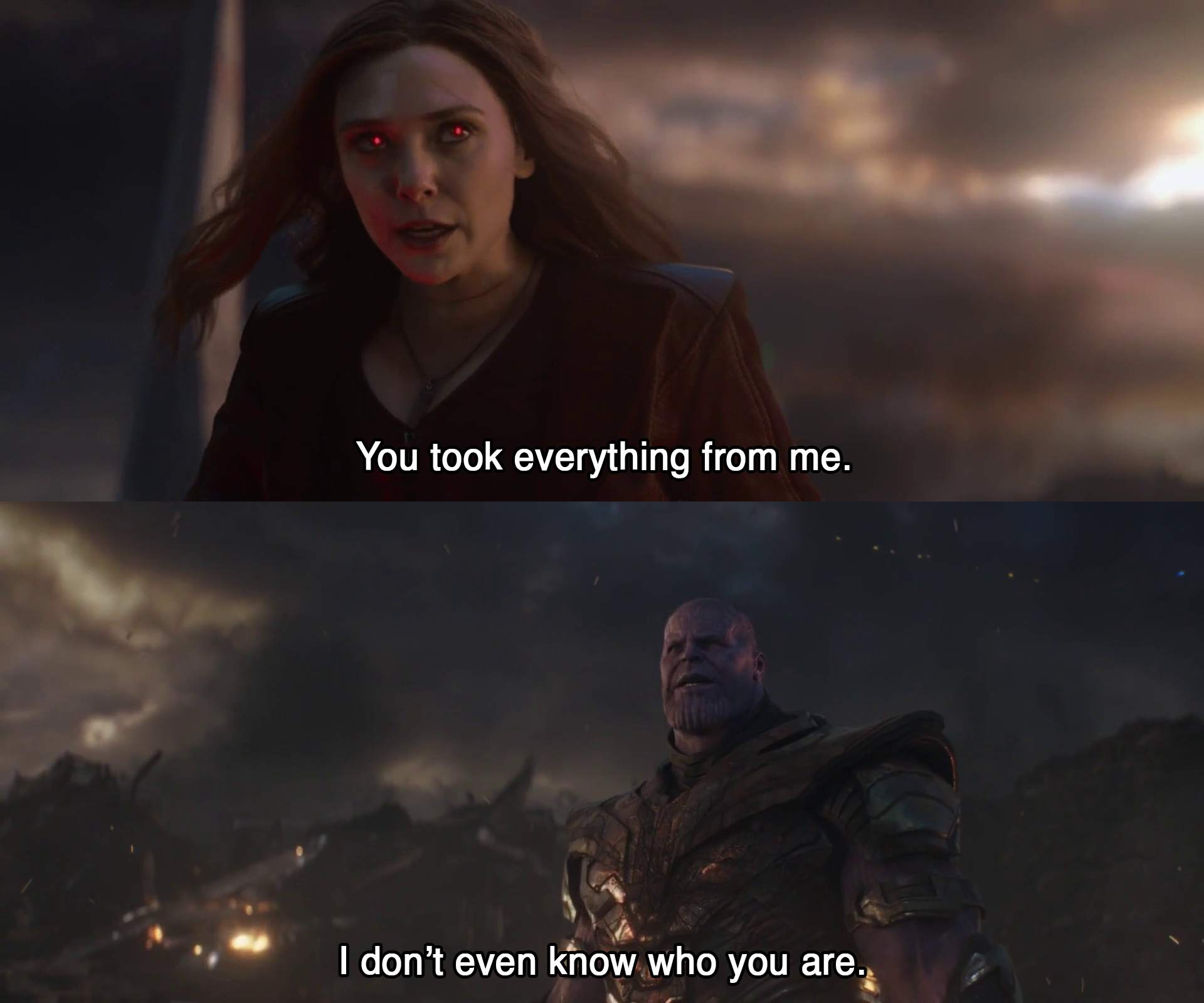 In one touching moment, we’re offered a flashback of Wanda binging Malcolm in the Middle alongside Vision, her only friend. It makes even her romance with Vision a little sad, as it reflects how she’s so isolated that her only companion is a robot.

It offers a deeper examination of a moment that winds up getting lost in Infinity War: Wanda being forced to kill Vision, only for Thanos to resurrect him and take the Mind Stone anyway. Caught up in the moment, with Avengers flying everywhere and Thanos on the verge of delivering The Snap that would kill half the universe’s population, there was little time to reflect on how traumatic the moment actually was for Wanda.

The opportunity afforded by WandaVision is maybe the single biggest justification for Disney Plus’ MCU shows to exist at all. At their best, they can elevate characters, like Wanda, who otherwise struggle for screentime amid big personalities and bigger stakes on the IMAX screen. They have the potential to be lovely little one-shot stories that deepen the MCU while also standing their own.

It would have been nice if WandaVision had fully lived up to that potential and properly reckoned with Wanda’s actions in Westview. But Marvel being Marvel, the MCU needed to go still bigger, and losing your robot husband (again) along with your two (admittedly imaginary) kids has a way of messing with you. Given a glimpse of multiple realities where she can in fact be a mother, Wanda decides that she wants to go to there, consequences be damned.

Comics, of course, have a rich tradition of heroes turning heel, with Sue Storm, Hal Jordan, and even Reed Richards all having gone to the dark side at one point or another. In the comics, Wanda herself famously goes mad in stories like House of M and Darker Than Scarlet, the latter which would later serve as the foundation for WandaVision.

Doctor Strange says of Wanda in one comic, “[A]fter a life lived with lost love, violence, and drama, what does she do? She says to herself, ‘I deserve happiness, I want to bring something into the world that is good. That I can love.’ And she gives birth to children… even though she can’t.

“She played Mommy to make herself feel like someone she thinks is normal. And that ends tragically as well? If I told you a story like this, you’d say to yourself, this sounds like a person who has lost control of themselves on a deep psychological level. You’d say this sounds like a disturbed person.” 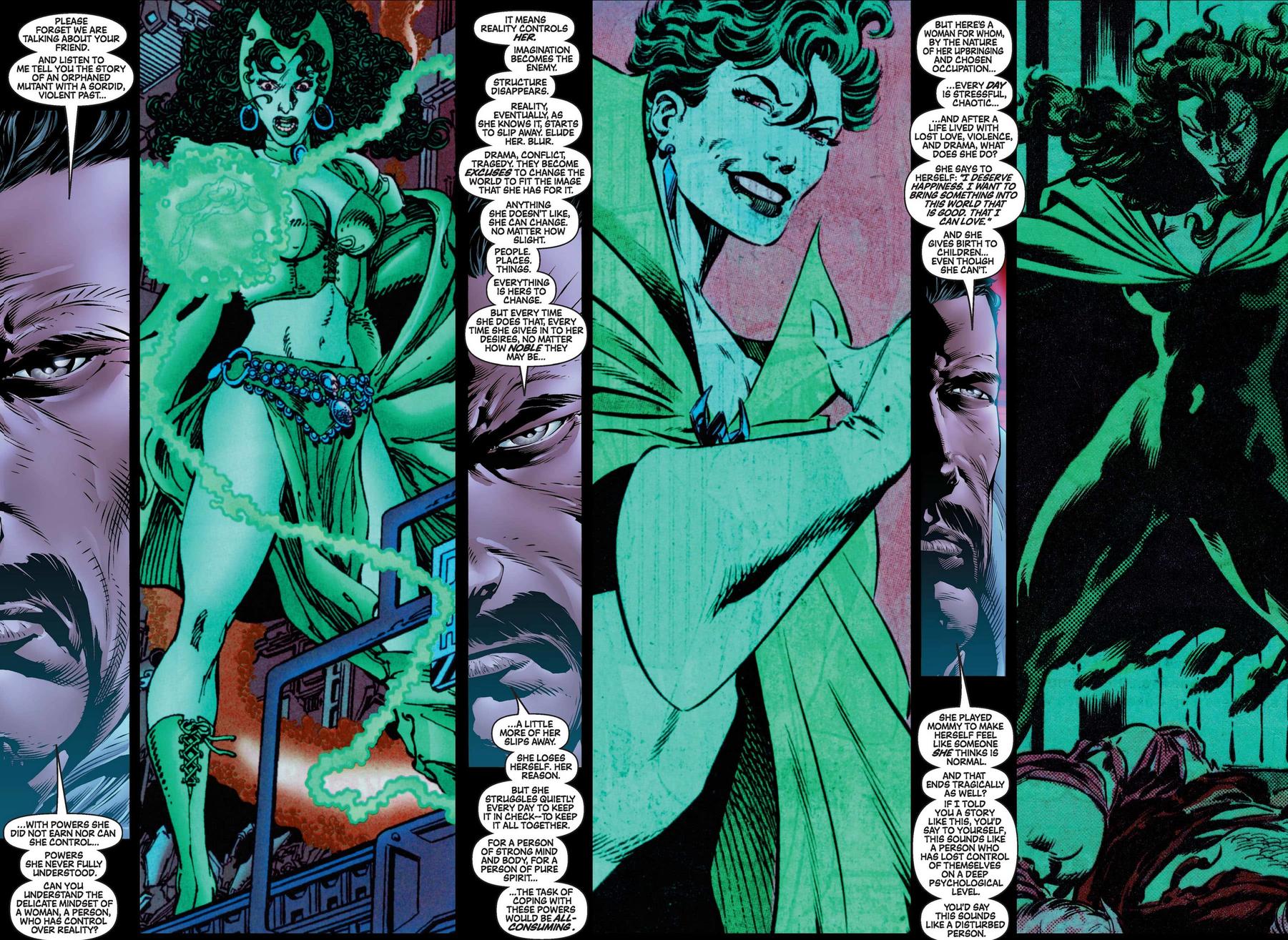 It’s a passage that may shed some light on the MCU’s current outlook on Wanda, and why she is so much like Michael Myers in Multiverse of Madness. In an interview with Harper’s Bazaar UK, Olsen frames it a different way, calling herself Wanda’s “lawyer” even though she says she doesn’t agree with the character’s actions.

“It was so fun for me because all these years I’ve been playing a character who is struggling; now, she has clarity for the first time—she knows exactly what she wants, and she doesn’t want to apologize for it,” before adding, “I think there’s a womanliness that comes with that: a strength in feeling completely entitled.”

For its part, Multiverse of Madness’ plot also offers a convenient justification for Wanda’s actions in the Darkhold, a “Book of Sins” introduced by Agatha that is said to exact a “heavy toll” on its user. Desperate, Wanda uses the book to “dreamwalk” into other universes, where she is able to be with her children, presumably driving her mad as part of the bargain. Assuming Wanda returns — and there’s little reason to believe that she won’t, especially with Olsen talking about how much she loves Scarlet Witch — the Darkhold’s influence will presumably be a big reason why characters might be willing to absolve her after blowing up Kamar-Taj and murdering Reed Richards and company (it’s okay, it’s the multiverse, etc).

One way or another, it was secretly kind of fun to watch the Scarlet Witch transform into the Terminator in her bid to capture America Chavez. To this point, the MCU has featured few real heel turns of its own, possibly because its heroes are intended to be as marketable as possible. If Iron Man goes crazy and wipes out a city, it’s that much harder to sell action figures. But Wanda has long been pushing back against her darker half — just look at the expression on her face during the airport battle in Civil War.

Casting her as Multiverse of Madness’ main villain has a way of raising the stakes, pitting two of the MCU’s most powerful heroes against one another while showing just how powerful Wanda has been since the beginning.

With that said, Wanda breaking bad has sparked conflicting feelings even within IGN. Lauren Gallaway, one of our social media coordinators, had an especially strong reaction to the moment. “I had to sleep on it but I realized what the rage of Doctor Strange 2 reminded me of: X-MEN THE LAST STAND. A strong woman goes off the deep end and murders everyone, Prof X is killed again, and the women is killed at the end. The parallels are wild,” she vented in IGN’s spoiler chat.

Doctor Strange 2 writer Michael Waldron, for his part, has no regrets.

“I think that all of those hanging threads are the things that the Darkhold preys on when she gets the Darkhold from Agatha. You see in the final scene of ‘WandaVision,’ that tag — the mistake that our Wanda makes is she opens the Darkhold. She starts reading, and I think it preys on her desire to have those children and have them for real this time. So yeah, that was how I arrived there. It made sense to me and it made sense to our teams because we built the story.”

As for whether Wanda is actually dead, Waldron says it’s “up for interpretation.” At the end of Doctor Strange, Wanda’s fever finally breaks, driving her to sacrifice herself as an act of penance for the rest of the heroes. But comic book fans know that a hero is never dead unless you actually see the body (and sometimes not even then). And in any case, it probably takes more to kill this witch then to drop a house on her, as our entertainment writer Amelia Emberwing is fond of saying.

Either way, there’s plenty more rich material to mine with Scarlet Witch, who after a middling start has gradually matured into one of the MCU’s most compelling heroines. Assuming she’s still alive, now is the time for healing and forgiveness. Now is the time for her to find a new family among the Avengers — not as an orphan living in the Avenger HQ, but as an equal. After everything, Wanda deserves a little peace.

Doctor Strange in the Multiverse of Madness Marvel Cinematic Universe Scarlet Witch
← Previous Post: The Winner Of Axe of the Blood God March Madness 2022 And Complete Bracket Next Post: Axe of the Blood God 24 Hour Charity Stream Raises More Than $10,000 for Trans Lifeline! → 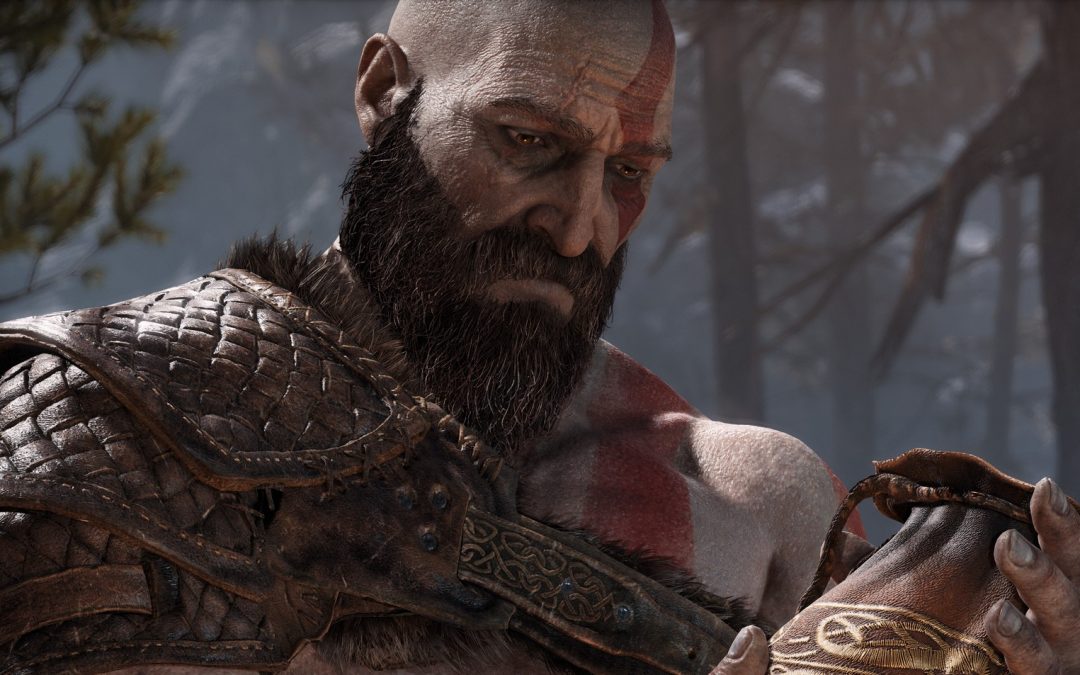 It's a slim week at the Blood God, so we dipped into our rainy day bucket of topics to discuss Sony's first-party games. Does it need more first-party offerings, or should it stick to its third-party deals? We discuss all that and more, including: Also in this...

Final Fantasy Tactics has been selected as the next candidate for the Axe of the Blood God Pantheon! Here’s what you need to know.